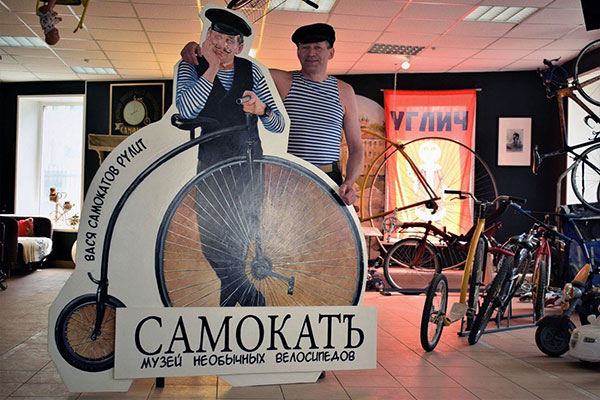 We are pleased to welcome a new member of the Association of Private and People’ s Museums of Russia – Samokat Museum of Unusual Bicycles, a private cultural institution. The founder of the museum is Sergey Kondakov.

The idea of creating the museum came to Sergey Kondakov a long time ago. He is a big fan of bicycles, and every time he travels around he started to bring back a souvenir with a picture of a bicycle on it. Gradually his collection lacked space on a shelf in the house and he had to build an extension to the banya. Then quite large bicycles appeared – Kondakov placed them in the yard of his private house. Just five years ago, he moved his entire collection to a museum specially created for him in the city. Being an ordinary museum worker in an ancient city with 15 major museums, including the Uglich Kremlin, is a lot of competition and can be boring. That is when he had an idea to turn the museum into a club, where today everyone can not only look at the exhibits, but also try them out and experience the atmosphere of the XIX century by riding an antique bicycle.

The exhibition consists of more than 50 historical and modern models of bicycles and scooters, clearly demonstrating the evolution of our two-wheeled friend from the primitive modes to the best examples of modern bicycles. Anyone can learn the history of the bicycle with a guide or on their own. Visitors get acquainted with the first bicycles and the legendary “Spiders”, forged bicycles and the well-known “Tourist” and “Start-Highway” models. The visit is accompanied by video clips and quizzes.