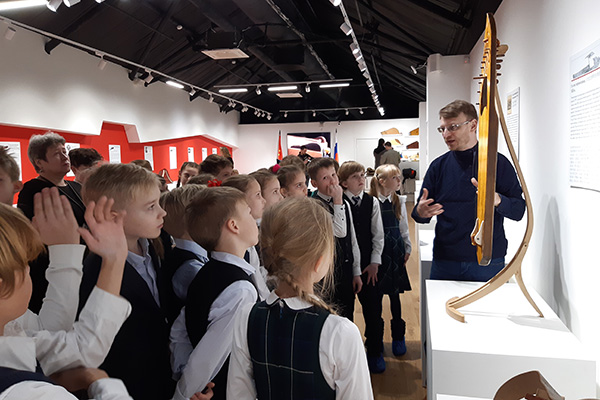 On February 25, 2020 students of 3B grade of Moscow “Lomonosov School” No.1530 took a guided tour and a gusli music class at the Museum of Russian Gusli and Chinese Guqin.

The tour was conducted by one of the founders of the Museum, musician, gusli player and cultural scientist Dmitry Paramonov. This master of the ancient musical instrument told the students all about gusli: which kinds of gusli had survived to the present day, why some of them were called wing-shaped and others helmet-shaped, which type was the oldest. He also introduced students to the traditional Chinese musical instrument Guqin.

During the class the children learned the proper way to hold the instrument. They also learned that different gusli differed not only in shapes but in playing techniques as well: on wing-shaped gusli you hit the strings, but on helmet-shaped gusli you pick the strings as if it were a guitar or a harp. And of course, the students took the opportunity to try and play the gusli.

On their way out the students were asked if they enjoyed the museum. They answered in unison: “Yes, very much indeed!”