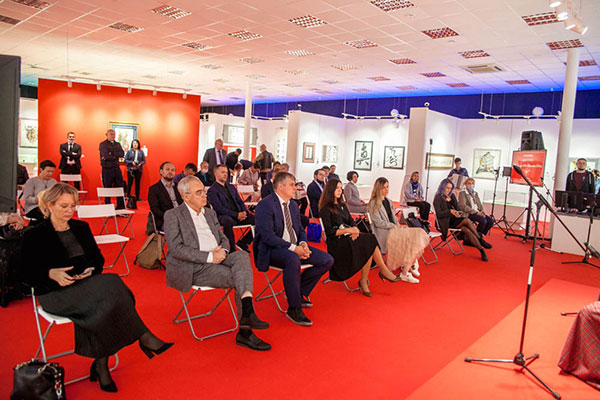 On September 24, “Private Museums of Russia 2020. Tretyakovs of the 21st Century” conference was held at the World Calligraphy Museum in Sokolniki Museum and Educational Center.

The founders and directors of the leading Russian private museums came to Moscow, such as Oleg Zharov (Vyatskoye Historical and Cultural Complex), Anna Orlova (Museum named after V.Yu. Orlov), Oleg Ivanov (Torzhok Gold Embroidery Museum) and other “Tretyakovs of the 21st century.”

The event organizer, director of the Association of Private Museums of Russia and the World Calligraphy Museum, Alexei Shaburov, defined the purpose of the conference – to unite the owners of the leading private museums in Russia for discussing topical issues of the private museums development in order to preserve and increase the unique cultural and historical values held in private institutions.

The conference was opened by Natalia Pilyus, a member of the State Duma Committee on Culture. Greeting the members of the association, she read out a letter from the First Deputy Chairman of the State Duma, Ivan Melnikov, addressed to the Head of the Association of Private Museums of Russia.

“A private museum in Russia is not only a cultural phenomenon, but also a reviving tradition. Relying on your enthusiasm and commitment to your beloved work, you contribute to the development of museums in Russia as a whole. You help the state to pass on to future generations an interest in the original pages of the history of our country. I am sure that on this path an increasing number of private museums will be able to obtain the status of a private museum of federal significance,” emphasized Ivan Melnikov.

Natalia Pilyus, on behalf of the State Duma Committee on Culture, thanked the founders of private museums for their love for the country. “Private museums are changing the world. They make people kinder and more informed. Private museums are not only about collecting and preserving those values, they are a world that enriches each of us and makes our life more interesting,” she said.

The deputy also expressed the hope that at the conference she would hear proposals on changing the legislation: “There is a law “Concerning the Museum Fund of the Russian Federation” and the Resolution of the Government of the Russian Federation “Concerning assigning the status of a non-state museum of federal significance”. I would like to figure out what the private museum community needs to make its activities even more interesting and more in demand, and would bring even more benefit to every citizen of our country.”

“Now there are no private museums of federal significance, and this is a great injustice. There are museums worthy of this status! These are the Vyatskoye Historical and Cultural Complex, the Buzeon Paper Museum, the Vadim Zadorozhny Museum of Technology, the Museum of Samovars and Bouillottes, the Museum named after V.Yu. Orlov… It seems that you can only rely on yourself. I believe that in the near future, no later than next year, these museums should receive the status of non-state museums of federal significance, otherwise why adopt a law,” said Alexey Shaburov.

Oleg Zharov agreed with him: “All my ten-year experience (this year the Vyatskoye Historical and Cultural Complex celebrated its tenth anniversary) shows there is simply no need to rely on the state and it is better to be under no illusion on this score. Another thing is that private museums have certain advantages over state-owned ones. They are free in the choice of subjects, areas of activity, and most importantly, they are free in the choice of forms of work. ICOM is actively discussing new functions and a new status of museums in the public space. More and more attention is paid to intangible culture and interaction with the local community. We are trying to integrate to create a museum not in its pure form, but a kind of social and cultural environment. It is no coincidence that we have signed agreements with the Bolshoi Theater, Soyuzmultfilm and the Russian Academy of Arts… We have already reached the point where we are producing films.”

Speaking about the cooperation of private museums with state authorities and state museums, the founder of the Museum of Typewriters Maxim Suravegin expressed the idea that the main problem of many private museums lies in the lack of space and the opportunity to display their collection. “It would be a big step forward if our country adopted the same law as there is in Germany. There, state museums are required to provide 10% of their area for exhibiting private collections. In this case, the income from holding such exhibitions should be distributed in a 30 to 70% ratio. So far, we often have to deal with the fact that state museums refuse to organize joint expositions under the far-fetched pretext,” said Maksim Suravegin.

Oleg Ivanov, the founder of the Torzhok Gold Embroidery Museum, expressed the opinion that everyone has their own problems, and we must understand that many of them are not systemic: “We are all different, and each of us goes his or her own way. But what is most important that we have one goal, which is to preserve cultural values ​​for future generations. That is why we must talk about systemic problems. These are a tourist flow and co-financing, and not only in the form of grants. Grant is a fish, and we need a fishing rod to catch this fish ourselves. We must be able to be included in museum development programs, tourist routes, and create associations in order to get some kind of synergistic effect.”

In turn, Alexey Shaburov spoke about what he had managed to do in a year after the “Private Museums of Russia. Talents of Russia” exhibition, and shared his plans for the future. The Association has released the second edition of the private museums catalog. The first edition represents 300 private museums; the second one includes 475 of them. The catalog has been translated into English and Chinese. The publication of the “Private Museums of Russia” magazine continues, and its fifth issue was presented at the conference. Also, working visits to private museums have started. Preparations have begun for an exhibition entitled “In the beginning was the Word”, in which about eight private museums will take part. It is planned to hold a large festival “Not a Museum” in Kamchatka.