My Favourite Teddy-Bear Museum – the Story is Not about Plush 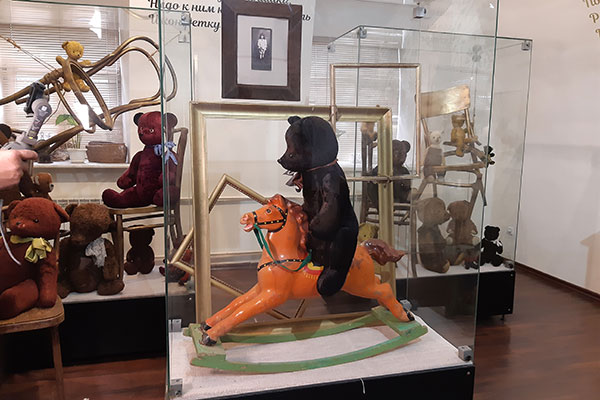 During a trip to the Yaroslavl region this summer, the team of The Association of private museums of Russia visited twenty-two museums. Many of them have already been described on our web pages. It’s time to share your impressions of the My Favourite Teddy-Bear Museum. Recently, Aeroflot magazine published an article “Five wonders of Yaroslavl”, in which it called this museum a must-visit place.

My Favourite Teddy-Bear Museum – for children. But only at first glance. In fact, adults are much more interesting here than children. If for children the museum is a place where they learn about how Teddy bears appeared, why in Europe and America they are called Teddy, where Winnie-the-Pooh got sawdust in his head, what the bear on the coat of arms of Yaroslavl holds in its paws, and much more, then for adults it is an opportunity to return to childhood. Cute Teddy bears raise a wave of warm memories in them, which they immediately begin to share with their children or grandchildren.

More than 700 bears “live” in the museum. They are located on two floors in five halls. In addition to plush toys, you can see bears made of porcelain, wood and metal. Most of them are bears of acquaintances, friends, and visitors. People come to the museum, feel its atmosphere, get their bears from the mezzanine and bring them, bring them and send them. The oldest and most valuable bears, who no longer like to hug and do not tolerate tactile contacts, find a place in the main hall of the museum in glass cases. There are unique exhibits among them. For example, the bear of the early 40s, sewn in a small artel, or the blockade bear, which, like the child who held it tightly, somehow miraculously survived the bombing.

“My favourite exhibit is the black rider, as we used to call it. It was sewn in the 50s from real, rather expensive plush according to the classic Soviet pattern developed in the 30s by the all-Union research Institute of toys in Zagorsk. This bear was found in the 90s by Yaroslavl artists in a garbage dump. He was sitting there, crying, one ear missing, his nose hanging by a thread. The bear was restored, put in order, and now he rides a dashing horse,” says Olga Nikonova, the museum’s manager. This bear with a very dramatic fate saw so much that the Museum decided to create a program for “children 12+” and tell why it was cut in the 30s, and he was born only in the 50s. What was that time? Why did it take twenty years to establish mass sewing of plush toys? What prevented it? And we are talking about repression, about the war, about the hungry ten – year-old after it… through the history of Teddy bears- about the history of the country. The program is called “Black rider. The story is not about plush.”