Museum named after V. Y. Orlov: a group of employees of the Association of Private Museums of Russia got acquainted with one of the best museums in Yaroslavl 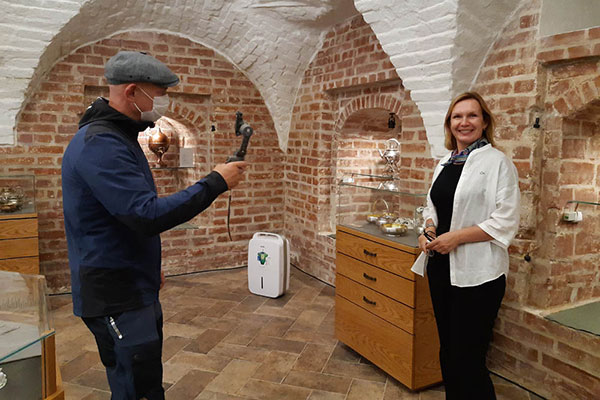 A group of employees of the Association of Private Museums of Russia visited the Vadim Yuryevich Orlov Museum.

This is one of the most beautiful museums in Yaroslavl. It is located on the Volzhskaya embankment, in a house recognized as an architectural monument. The building stands on the basement of a 17th century house. At different times, rich artisans, merchants, military and civilian officials lived in it. In 1869, the building was transferred to the Yaroslavl Society of Physicians for the organization of a hospital for incoming patients. After the revolution, it was under the jurisdiction of the regional health department until 2001, until the house fell into disrepair. The building has not been used for more than ten years. Oddly enough, but it was this fact that led to the emergence of a new private museum in Yaroslavl.

In 2014, the chairman of the board of directors of OJSC Yaroslavl Technical Carbon, Vadim Yuryevich Orlov, took the initiative to buy the building in order, on the one hand, to save the object of cultural heritage of federal significance, and, on the other hand, to show residents and guests of the city their own collections, which, as he said a businessman himself, he began collecting in the late 80s. At first, the motive was a simple interest, and then there was a desire to preserve the things created by our ancestors, to show how skillfully they did them.

The museum opened on December 6, 2018. Unfortunately, Vadim Yuryevich did not live up to this day, in 2016 he passed away, but his idea was embodied by the efforts of the plant and with the participation of his relatives.

“The collection includes 4,700 items. Of these, 2,500 are porcelain, mainly from private factories in Russia: Gardner, Popov, Safronov, Kuznetsov, Miklashevsky, says the director of the museum Anna Orlova. – Vadim Yuryevich, as a person deeply in love with Russia, mainly collected objects created by the hands of Russian craftsmen, they always delighted him.

The second largest section of the museum collection is Russian and European art and household silver. It contains about 1300 items. Tea and coffee sets, salt shakers, caddies, crackers, vases, crystal decanters in a silver frame, serving utensils, table sets – this is an incomplete list of the rarest samples of silver items presented in the museum.

And the third section – artistic casting of the Ural iron foundries – has about 250 exhibits.

The museum has nine exhibition halls with permanent and temporary exhibitions, and “imported” exhibitions are arranged. The team of the Association of Private Museums also managed to get acquainted with one such exhibition. The exhibition “Lozhkoredskost”, which presents items from the collection of the Museum of Spoons of Tatiana Pikunova (Vladimir), is of great interest among Yaroslavl residents, especially children.

“Museum for me is life. Once I thought of the museum as something very boring, but now I can’t imagine myself without it, – says Anna Orlova. – Therefore, my task is, firstly, to preserve the collection, and secondly, to change the attitude towards the museum, to make sure that everyone who comes to us is comfortable, that the expositions change and the collection lives, so that people have a desire to come to us again and bring our children. A museum for me is love for people, and the people who visit us feel it. “