Love for the homeland 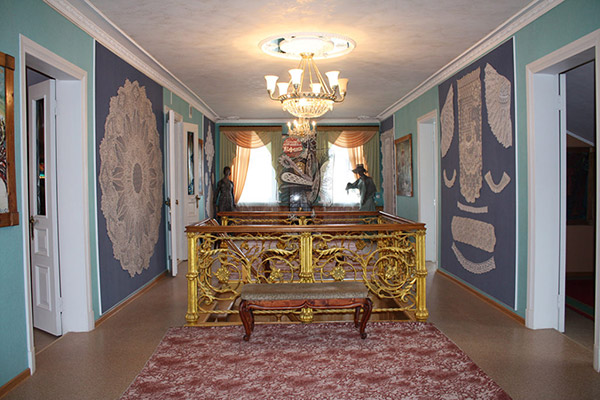 What makes people spend their spare time and money on founding museums, organizing charities, and preserving cultural heritage? After speaking to E. P. Krikunov and other enthusiasts from all over Russia, I found my answer — it’s their love for the hometown and their fellow citizens. To my question: “Why did you decide to open a museum?” Evgeny Pavlovich answered: “I am from Yelets, born and bred, I think that says it all.” For many years now, he confirms his words with his everyday actions. His love for his homeland has been developing since his early childhood.

Evgeny Pavlovich Krikunov was born on February 13, 1944, in a large family in the city of Yelets. For as long as he can remember, he was helping his father in everything. They were engaged in raising livestock, beekeeping, vegetable gardening, and even built a house together. The large family lived off its hard work and diligence. During his school years, the boy was a competitive swimmer, he was interested in culture and art, collected art postcards. After graduating from high school, Evgeny continued his education at the Volgograd Institute of Physical Culture, and in 1967 he was assigned to work in Siberia. The taiga with its boundless open spaces and majestic nature spoke to his heart, but it was there that he felt how he longed for his homeland.

After living in Novosibirsk, Krikunov returned to Yelets, and there, in his homeland, he continued his teaching and started a collection of art books. Later, he got interested in icons and antiquities as well. His passion for painting opened a new stage for him as a collector. To show his collection to as many people as possible, he renovated two small rooms in the house where he was born and filled them with antiquities, paintings, icons, books, and an extensive music library. These rooms became a center of attraction for the locals interested in art and culture.

Later, he bought a house at 108 Oktyabrskaya street, where the Museum of Yelets Lace, which we present in our magazine, is housed today. It allowed him to make the art accessible to a wider range of visitors. The museum was opened in 2000. It was based on the collection that Evgeny Petrovich lovingly built in the last 25 years. The exhibit includes many items of clothing, household items, and even jewelry, some were made more than a century ago. All items are handmade, which makes them even more valuable. The building itself is also surprisingly elegant and lace-like. The locals call it “the blue pearl”. The museum of the Moscow artist P.B.Bludnov, a member of the Union of Artists of the USSR, a permanent participant of All-Union, Republican exhibitions, and numerous shows outside the country, is located in the same building.  At one time, Pavel Borisovich came to Yelets at the invitation of Evgeny Pavlovich and stayed there till the end of his life. His paintings convey the spirit of freedom and relatedness and have a recognizable and unique style. It’s worth mentioning that E. P. Krikunov once bought an apartment where any artist visiting Yelets could stay. Pavel Bludnov also lived there.

Everything in the house on Oktyabrskaya St. is arranged in such a manner that lace and paintings are in harmony forming a unity of arts. Evgeny Pavlovich designed the museum himself relying only on his own taste without any professional knowledge, so the exhibits are not organized by time of creation or by subject, but the place has a unique atmosphere. The owner designed and created it with his own hands at his own expense, and it’s full of love for every item and every inch of the museum.  All the lace in the exhibition was made by hand by lace makers. They are created in the famous Yelets lace style, which even an unknowing visitor could easily recognize.

Evgeny Pavlovich has done a tremendous job in preserving the cultural heritage of Yelets, and now both locals and tourists can visit five wonderful museums, which have all become real tourist attractions. I would like to say a few words about the other three museums. Fine art lovers would find it interesting to visit the Cultural Center of the People’s Artist Viktor Sorokin at 56 Sovetskaya st. A descendant of a noble family, he had a rough start in life and lost his parents at an early age.

After the war, he graduated with honors from the Moscow Institute of Fine Arts, and after spending a few years in Moscow, left for Yelets in 1948. “In Yelets, I immediately felt better: the nature, the architecture, the simple life. I felt free. Nature was all around me. If it were not for Yelets, I probably would not have made it in Moscow as an artist”, Viktor Sorokin once said after many years in this provincial city that became his second hometown. Sorokin painted at least five or six works every year and exhibited them in the Lipetsk Regional Museum of Local History.

For his contribution to the development of culture and art, he was awarded the Order of the Red Banner of Labor, the Order of Peoples’ Friendship, as well as the honorary titles Honored Artist of the RSFSR and People’s Artist of Russia. In 1992, E.V. Krikunov opened the Viktor Sorokin Cultural Center in Yelets, and in 1994 Viktor Sorokin was made an honorary citizen of Lipetsk. In 1997, the painter was awarded the gold medal of the Russian Academy of Arts and the order of the Badge of Honor. In June 2001, the last exhibition of the painter took place, and on August 25 of the same year, at the age of 88, Viktor Sorokin passed away and was buried in Lipetsk. The artist kept painting almost until the end of his life.

In the early 2000s, at 108 Oktyabrskaya st., E.P.Krikunov opened a museum dedicated to another talented artist who lived and worked in Yelets for many years — V.I. Shevchenko. The work of this brilliant painter and thinker, who fought in the Great Patriotic War, is a source of national pride. The artist’s rich and multidimensional heritage has an acknowledged place among the most prominent figures of the world’s fine art of the 20th century. For his contribution to fine art, Vasiliy Shevchenko was granted membership of the International Federation of Artists of UNESCO. During his life, he painted more than 1000 paintings and 7000 sketches. His works have been exhibited in Germany, Korea, Spain, the USA, Finland, and Japan. Works of V. I. Shevchenko are kept in the Pushkin State Museum of Fine Arts in Moscow, in the Tsaritsyno State Historical and Architectural Museum, in the Ministry of Culture of the Russian Federation, in the Repolo Gallery in Finland, as well as in many regional Russian museums and private collections. For many years Vasiliy dreamed of opening a personal art gallery so that people “leaving it, would take a piece of it in their hearts”. His dream came true during his lifetime with the help of the Yelets collector and philanthropist E. P. Krikunov.

At 56 Sovetskaya Street, Evgeny Pavlovich founded a museum of the History and Symbolism of the CPSU. As soon as you enter the yard, right outside the house, you come across busts of the great leaders, posters, and other attributes of the Soviet era. The museum is also full of the Soviet party symbols. There are busts of Lenin, pictures and photographs of the heads of state of the Soviet Union and their associates, flags, banners, badges, etc. According to the museum owner, he collected this treasure all over the country, some of it he bought, some of it — found in the dumpsters. Now these items turned into a solid collection. The museum is especially popular among Chinese tourists, who, while in Russia, travel to Yelets exclusively to visit the museum.

Unfortunately, during the creation and registration of the museums, Evgeny Pavlovich encountered some misunderstanding on the part of municipalities. He faced numerous lawsuits, but justice triumphed, and he won them all. At the time, he got the support of the Izvestia newspaper, and together they managed to save these cultural objects. In Soviet times, he fought to save the Yelets churches. By decision of the City Executive Committee, all churches except for the Ascension Cathedral were to be demolished and a 9-storey hotel and a restaurant to be built in their place, right in front of the Cathedral. Yevgeny Pavlovich was outraged. He went to Moscow and convinced a film crew of the then famous all around the Soviet Union satirical TV Magazin Fitil, headed by Yaroslav Khorechko, to come to Yelets. After the news story had been shot and released, the plan by the local authorities to demolish churches failed. The hotel was built just above, and all churches remained untouched, which allowed preserving the historical appearance of old Yelets.

The work of the Yelets philanthropist is not limited to the foundation and maintenance of museums, so I would like to say a few words about his efforts to perpetuate the memory of famous Yelets residents. Despite the resistance of the local government, Evgeny Pavlovich erected four

monuments in the city at his own expense:

— the Monument to poet and writer I. A. Bunin was erected at 1 Mayakovskogo st. in 1995 in time for his 125th anniversary (sculptor — the People’s Artist of Russia Yu. D. Grishko;

— the Monument to philologist, publicist, influential thinker, who was called the Russian Nietzsche, V.V. Rozanov was installed in the Sorokin Cultural Centre at 56 Sovetskaya st. in 2005 (sculptor — Honored Artist of Russia P.P.Chusovitin);

— the Monument to the Yelets Infantry Regiment, which was formed by the Decree of Peter the Great in 1711 and participated in the Patriotic War of 1812, was installed at 1 Mayakovskogo st. in 1996 (designed by the son of E. P. Krikunov, Alexander);

—the High-Relief to the Innocent, Archbishop of Kherson and Tavria, born in Yelets in 1800, was installed on the facade of the Church of the Transfiguration on May 26, 2008 (sculptor — P. P. Chusovitin).

You must agree that the contribution of E. P. Krikunov to shaping a civil-patriotic attitude of citizens towards their heritage is truly invaluable. However, this too was taken to the point of absurdity

— for some time, the local authorities demanded to pay rent for the land occupied by the monuments to the famous local people, but then common sense prevailed.

Despite all the difficulties, Evgeny Pavlovich doesn’t give up, he continues to conduct excursions, collect exhibits and generate new ideas on how to preserve and multiply the cultural and historical heritage of his hometown Yelets. In 2007, he was awarded the Order of the International Charitable Foundation Patrons of the Century for his multifaceted activities.