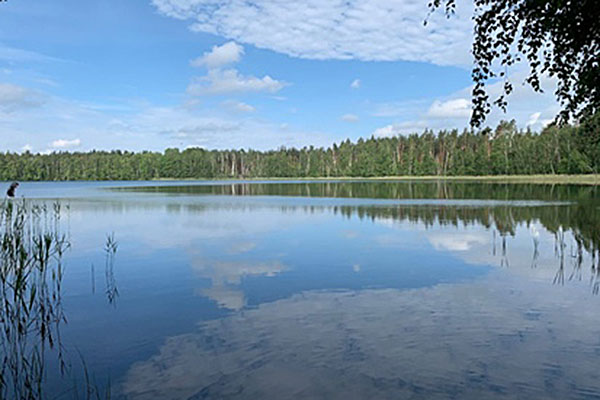 We collected some mentions of the village from the archives, residents’ memories, and works of local historians.

The village was first mentioned in the scribal books of the Muscovite state in 1629. But most likely, the village was founded in the 10th-11th centuries, during Slav settlement in the Oka basin. Local legend says that the village got its name from wonderful delicious nuts that grew there in abundance. In the past, it was difficult to get there. In the summer, log roads were built through swamps and streams, and that gave the first name to the settlement — Slannikovo. A long time ago, people had to take barely noticeable forest paths, or in the summer, to swim down the forest rivers, now long gone.

In ancient times, the village was located 2 kilometers to the west of the current village and was originally named Olovo (with emphasis on the second “o”).

A.Baburin Recorded from the words of a resident of Lakash village, A.Fokina, born 1988. The record was made on December 22, 2002.

Locals and residents of nearby villages call Orekhovo a migrating village. According to one explanation, it got this name after a strong fire, that destroyed the entire village and forced residents to move (migrate) to another place. According to another one, it got this name because when the cultivated lands became infertile and produced a poor harvest, locals would literally in a few days dismantle their houses and move (migrate) to another spot.

A.Baburin Recorded from the words of the teacher of local history and tourism of Gorodkovichi village, Spassky region I.V. Klishkov   The record was made on November 26, 2002.