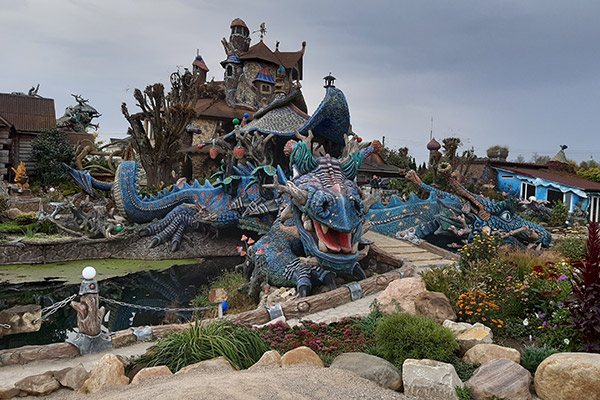 Kozelsk is one of the centers of pilgrim tourism not only in Russia, but also in the entire Orthodox world. There are famous monasteries of Optina Pustyn and Shamordino in its vicinities and many other amazing and curious places, such as Ugra National Park, Devil’s settlement and Kozelskie Zaseki. Not so long ago, another point of attraction appeared in the city, Vikhlyandiya Estate Museum. The team of the Association of Private Museums went there in September this year to see with their own eyes a fabulous country, which has no analogues either in Russia or abroad.

The Vikhlyandiya Estate is a museum of modern landscape architecture and plastic art made in the fantasy style, which was created by the local businessman Vladimir Vikhlyantsev. The first piece of architecture in Vikhlandia appeared in 2011, but back then nobody even thought about creating any such land.

“I had to build a fireplace and a bathhouse, so I found a craftsman, an original Ukrainian architect and artist Vladimir Kolesnikov. He worked on the creation of sculptures in the “Three heroes” children’s park in Kozelsk. Kolesnikov suggested that I also build a gazebo, I agreed. All the time while the work on the gazebo was going on, he was drawing something with enthusiasm during the breaks. It turned out to be a tree house. I liked the idea of creating a fabulous house. Having finished with the gazebo and fireplace, I myself did not want to stop there,” Vikhlyantsev recalls.

Besides the bathhouse and gazebo, next to which a rock with a red dragon and a fabulous house in the form of a tree popped up, one by another, other art structures appeared, decorated with many decorative elements in the form of all kinds of animals, birds, fish, snakes and insects following. Kolesnikov invented the images himself. The owner of the estate allowed the master to show all his creative potential. Vikhlyantsev only made minor adjustments.

“There is a common method in science fiction literature called popadanchestvo (accidental travel in English), where a character is transferred from one world to another. Quiet the same thing is happening here. First, right after a fairy tale, you find yourself in a quarry, in which a well is hidden, and then into a techno garage. Everything is mixed here. Anyway, a visit to the estate gives unforgettable impressions. It is often compared to the Gaudi park and even to Disneyland,” says Vladimir Vikhlyantsev.

The fabulous country has become the trademark of Kozelsk. Thanks to “Vihlyandiya” tourists began to come to a small town with a population of just over 16 thousand people. The estate is especially popular among families with children. Children and adults climb into the House on a Stalk, created based on the fairy tale “Jack and the Beanstalk”, go in the Pirate’s House, and climb the stairs to the balconies with curiosity. You can wander freely around the estate, moving from one bank of the Klyutoma River to another over a bridge made in the form of two dragons, Katyusha and Vanyusha. The only restriction is that you cannot walk on grass and flower beds and enter the Tree House, since the owner of the estate lives in it.

By the way, the fabulous decorations have not only been used in the outer walls of the main building of “Vikhlyandiya”, but the interiors of the house are made in the same style, too. It is filled with many items that could decorate any museum exhibition. There are the author’s ceramics made by the Kaluga craftsman Igor Papakin, lithographs by Alexander Lytkin and Oleg Mikhailov, paintings by the Belarusian abstract artist Oles Faley, and a collection of paintings by Soviet artists of the 50–70s. Vladimir Vikhlyantsev plans to create a separate room for an art gallery. However, this is not all. Vladimir dreams of going beyond the fortress walls of his kingdom and building a fabulous open-air amphitheater where concerts and theatrical performances could be staged. This means that Kozelsk has every chance to become a center of music tourism in the future.