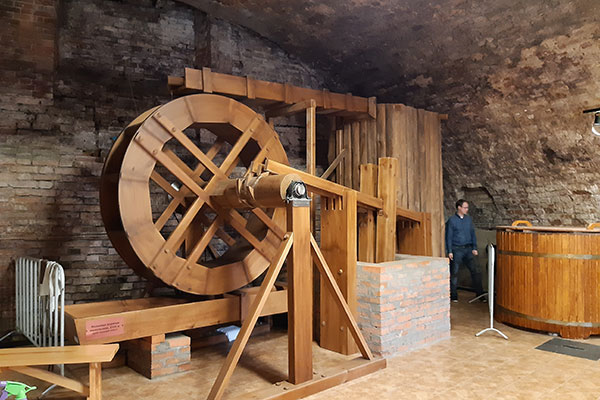 There are many versions for the origin of the expression “to carry water in a sieve”. The team of the Association of Private Museums of Russia learned about one of them when they visited the only museum of paper in Russia – “Buzeon”. The history of the development of paper production from its inception to the present day is displayed in the museum. It has many mechanisms associated with papermaking in different eras. One of them – a model of a water hammer mill of the 17th century – perfectly demonstrates how paper was made in ancient times. Water was poured into the mortar, and then rags were thrown into it and grinded. According to the museum, this is where the well-known idiom comes from.

The Buzeon Paper Museum was opened two years ago on the initiative of Dmitry Alexandrovich Dulkin, General Director of United Paper Mills, which includes the Polotnyano-Zavodskaya Paper Mill, one of the oldest paper-producing enterprises in Russia to date. The Polotnyany Factory was founded in 1718 by the personal decree of Peter I. By the end of the 18th century, it held a leading position in the industry. The museum is located within its area in the historical production building.

In “Buzeon” you can learn almost everything about paper: see samples of Japanese, Arabic, French, Russian hand-made paper of the 18th-19th centuries, watch newsreels on paper production in the USSR during the first five-year plans, the Great Patriotic War, 1960s, take a virtual tour of the existing workrooms of the Polotnyano-Zavodskaya Paper Mill, make a sheet of paper on your own and take part in a workshop on creating decorative products using the “punching” technique, papier-mâché and origami.

“The idea of ​​creating the museum was in the air. The Polotnyany Factory is one of the three cradles of the Russian paper industry. Saint Petersburg, Yaroslavl and Kaluga are three places where the first paper mills in Russia were opened. The museum is located in the interiors of an 18th century paper manufactory with an ancient landscape preserved near it – a water canal and settling ponds, and that is why it has a historical appearance. One should never forget about the role of personality in history. If six years ago Dmitry Alexandrovich Dulkin had not decided to restore the decaying building, the museum might not have appeared,” says Konstantin Gavrilenko, Director of the Buzeon Paper Museum.

Dmitry Alexandrovich Dulkin, Doctor of Technical Sciences, graduated from Moscow State Technical University named after N.E. Bauman. He felt said that in Russia during the technical re-equipment of enterprises, samples of equipment and industrial catalogs are not saved as in Europe and around the world, but are simply destroyed. In addition, almost every country in Europe had its own paper museum, or even more than one. Surprisingly, there was no such museum in Russia. A country that ranks one of the highest in cellulose and paper production in the world, a forest country, did not have this type of museum. The creation of the museum was an attempt to fix the situation and preserve the history of the industry.