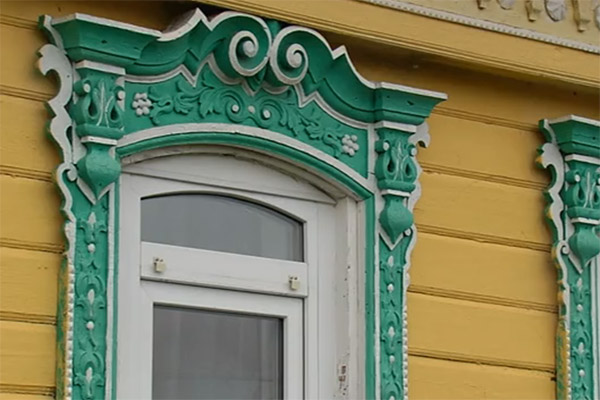 The journalists Ksenia Ionkina and Stepan Erofeev on the morning show on Channel One did a story on Argun carving, an ancient handicraft of the 18th century once popular in Kirzhach, Vladimir region. The craft can be seen in the form of ancient carved platbands, that survived to this day on the windows of Kirzhach houses. “Arguns are not just any carpenters, they are craftsmen who could “talk” with the wood, the platbands they made can “speak” too, each hut tells the story of the household and the entire family”, the story says. The report also showed local activists that work to revive the ancient craft in order to bring back the lost historical and cultural value.

Indeed, some of the unique works of Argun carvers have been preserved to this day on the facades of wooden houses in Kirzhach and nearby villages. The Explanatory Dictionary by Vladimir Dahl explains that only Vladimir carpenters are called arguns. The locals are trying hard to bring back the lost art of Kirzhach craftsmen. For example, Evgeniy Fedorov, Director of the Kirzhach Printing House, opened a private museum named “The Museum of Copper and Brass. Argun House”. Among other things, the museum collection contains real antique platbands, it occupies two houses. The first one was built in the 1860s and now hosts the Museum of Copper and Brass. The second one built at the same time is a real wooden hut that once belonged to Pavel Kalachkin, an argun carpenter. Back in the days things were built to last, so the hut is still in good condition. This house as a carpentry masterpiece is the main exhibit of the museum. There is a lot to see inside it too: antique woodworking tools and real argun platbands.

The report also tells a story of the Mini-Museum of Platbands, presenting a collection of platbands from the villages of the Kirzhach region. The idea to create a mini-museum belongs to a local historian Tatiana Samoilova. Tatiana Ivanovna believes, that it is still possible and even necessary to preserve Argun carvings of the 19th and the early 20th centuries in the form of the original Kirzhach platbands and photos. It was made possible with the help of the team of the Kirzhach Printing House and its Director Evgeniy Fedorov. Activists traveled through the villages of the Kirzhach region and photographed the most significant examples of Argun platbands that were obviously still installed on the remaining houses. Some of the platbands were removed from the decaying or demolished houses, restored and saved as part of the culture.