Vyatsky hosted the premiere of a Kirill Serebrennikov film 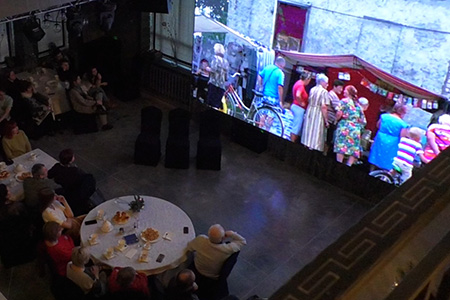 The YarNews-TV crew watched “Who can live well in Russia” and drove through Nekrasov places.

Volga! Volga!.. In the spring your torrents

Cannot flood the fields as much

As our people’s awful pain

Lines of Nekrasov’s poems are heard on the bus that travels to the places where they were once written. Old Kostroma tract, Abbakumtsevo, Greshnevo. On the roads that Nikolay Nekrasov once walked, students of the Yaroslavl “Teatralka” now travel. Together with them on the bus are teachers, scientists, journalists. The first stop is the family tomb of the Nekrasovs, once completely abandoned and returned from oblivion by Oleg Zharov, the founder of the “Vyatskoye” historical and cultural complex.

– Oleg Alekseevich is trying to help preserve the monument and helps to ensure that there is an opportunity to restore it. The fact is that, as it turned out, the monument is not registered in any authority. It exists only in fact, – says the guide.

As a result, for several years Oleg Zharov was able to return these places to their original appearance. Two years before the bicentennial anniversary of Nikolai Alekseevich Nekrasov, much remains to be done. And the matter is not only in the traditional Nekrasov holidays of poetry. In the XXI century, other formats are needed – as was decided in the “Vyatskoye” historical and cultural complex.

– There are a lot of really interesting events happening here. In different forms, for example, different formats for spending the days of Nekrasov in Vyatskoye. And there is a new form this year. We are present at the birth of a new discussion club, – Marina Vasilyeva, director of the culture department of the Yaroslavl region, is sure.

The format chosen is really unusual, with the involvement of truly world-famous celebrities. Back in 2014, actors from the Volkovsky Theater and the Gogol Center, led by Kirill Serebrennikov, drove through Nekrasov places. The film “Summer” was still in the future for him, and as a result of a trip to the Yaroslavl region a “documentary” appeared – “Who can live well in Russia.”

– Today you drove the same way. We wanted you to immerse yourself in the atmosphere in which they were. Five years have passed since the film was shot. We all answered ourselves the question of who can live well in Russia, – says Oleg Zharov, the founder of the “Vyatskoye” historical and cultural complex.

An hour-long film keeps the audience in suspense. On the one hand, recognizable places, native Yaroslavl spaces. On the other hand – a look at Russia from Moscow hipsters’ perspective, who themselves admit that they did not see the country outside of Facebook.

– We traveled 1350 kilometers in 7 days. And 50 kilometers were walked. Gogolevites were young, inexperienced. They did not see Russia. They saw the country for the first time, – says Margarita Vanyashova.

Margarita Vanyashova is the co-author of the film and the developer of the route that the crew traveled along. Margarita Georgievna is frank: in the end result, there were not enough positive images for her. The same is said by those who watched the premiere in Vyatka.

Semibratovo, Rostov, Porechye, Martynovo. The list goes on. Each stop ended with a reading of a chapter from ” Who can live well in Russia”. The heroes of the film are like Semibratovo peasants who fell from the 19th century into the 21st.

– Yes, in some ways these are the little men of the 21st century. They are different. But in an interview, one of them said the truthful words. The main thing is that in the heart. This property, inherent in Russian people, is mercy, compassion, – said Nina Maltseva, deputy director of Vyatskoye HCC.

All participants in the discussion club agreed on one thing – a new hope is right here in Vyatka. And for the most part, not even the places are important, but the people who created them.

– In fact, we must not start from places. Not from the fact that this is a beautiful building, and that is an ugly one. But from people. One will come and say – it is ugly. And another will come and say – I will restore this building! I will do a makeover! – Kamila Kutsik believes, student of the Yaroslavl Theater Institute.

– The village of Vyatskoye itself, on the one hand, is in the same row of Nekrasov villages. On the other hand – it, Vyatskoye, shows that this situation may change. Vyatskoye seeks to create a model. And not even about “who”, but “how” to live well in Russia, – says Valentin Stepanov, vice-rector of the Yaroslavl International Academy of Business and New Technologies.

– It’s great that we are all here today, that we are discussing a lot, that there are a lot of youth. And thanks to O.A. Zharov for everything that he does, and for this magnificent event that unites us all, -summarizes the full member of the Academy of Arts Elena Paskhina.

Similar meetings in Vyatskoye will continue. Moreover, in the historical and cultural complex a new creative space has appeared, a real interactive room, where discussions will be held.

– In the very near future, the exposition of the Bolshoi Theater Museum will open in the Vyatskoye HCC. And in this space we plan to meet with the masters of the Bolshoi Theater. We plan to host creative evenings in our unique hall: in March, an outstanding actress, people’s artist Lyudmila Chursina agreed to come here, – says Yuri Itin, doctor of pedagogical sciences, professor.

And do not forget that the New Year and a great weekend are in front of us. And you will definitely be able to spend them productively in Vyatskoye, which is now part of the UNESCO family.