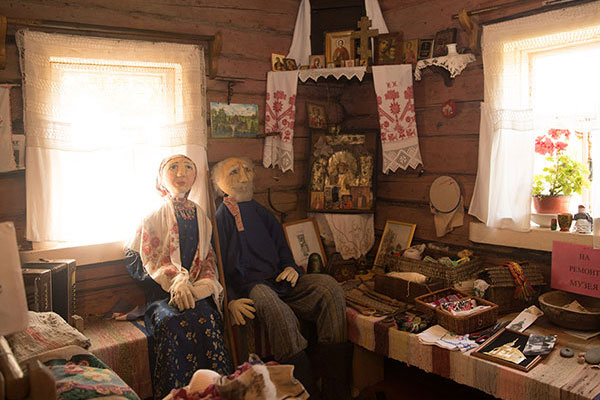 Welcome the new member of the Association of Private and People’ s Museums of Russia – the Vodskaya Pyatina Museum. The founder and owner is Valentina Fedorovna Babkina.

The museum is located in two huts under one roof, one built in the early XVIII century, the second – in 1898, where the Ivanovs lived. In the old hut lived a family of 13 people and when the 14th (Ustinia) was born, the father of the family decided to build the second hut according to the technology of Vodsky building.

The museum is open to all who wish to get acquainted with the household utensils of the Vodsky, Izhorsky and Russian peoples who have lived in these places for ages: one can get acquainted with furniture, domestic utensils, looms, spinning wheels, tools, textiles and photographs.

In the old half of the house, in a small room with a Russian stove, everything looks as if a large family still lives here and just came out to work in the yard. In the red corner, under the two-sided embroidered towel, there are icons in front of which which they say the master of the house prayed. The towel is decorated with embroider: an old vodsk pattern. In the opposite corner there is a bed with cushions, covered with a homemade lace coverlet. A large weaving loom, a smaller one for belts and a spinner occupy the larger part of the room. The coffers have been used to store linen and they are now filled with embroidered towels, tablecloths and bedspreads. In the kitchen corner there are cooking utensils and accessories – sieve, grinder, whiskers, lids, pots, pans and other small household items. Pots and molds for bread are on the stove, and there are pots and pans next to it. Numerous dolls in folk costumes, donated by the Sosnovobor craftswoman Irina Rodionova, sit by the windows.