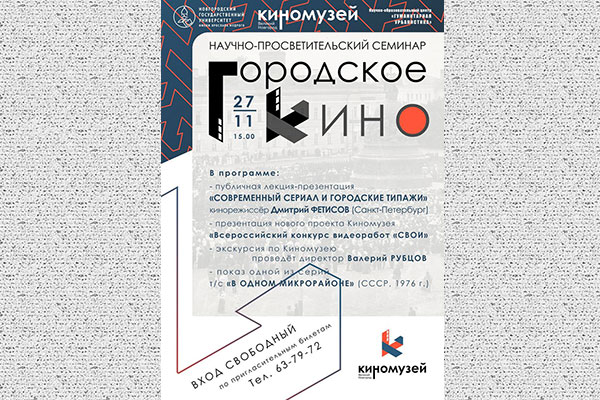 This Sunday, November 27, at 15.00, the Cinema Museum will host the fourth meeting within the framework of the CIVIL CINEMA educational workshop. The workshop is held together with the scientific and educational Urban Studies centre of Novgorod State University. Admission is free!

This time, visitors will be able to listen to a lecture-presentation “Contemporary TV series and urban characters” by film director Dmitry Fetisov (St. Petersburg), and at the end of the workshop to watch the first episode of the old Soviet TV series “In One District”, which starred a whole cast of famous actors.

Moreover, cinema director Valery Rubtsov will present a new project that has been launched with the support of the Presidential Fund for Cultural Initiatives and will give a tour of the museum.

Valery Rubtsov Cinema Museum is a member of the Association of Private and People’s Museums of Russia.