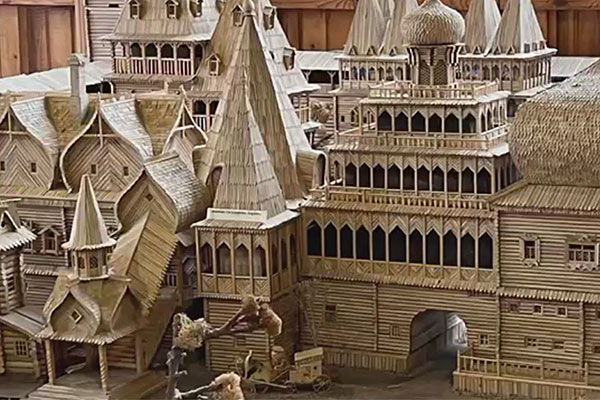 In this hall you can see a model of “Yury Dolgorukov’s Ancient Wooden Moscow”. This is the work of the National Artist of Russia Viktor Bakharev.

Bakharev Victor Ivanovich was born on May 25, 1939 in Istrinsky district of Moscow region in the family of a carpenter. At a mature age he suddenly took a great interest in the creation of models and articles of straw, reeds and wood: he wanted to create a Russian village in miniature. He enthralled the whole family with his work. He began to create models and true-to-life reproductions of famous houses and churches. In the early period of his creative endeavor he made a small copy of Yuri Gagarin’s parental house, and then made copies of other famous people’s houses – for example, Sergey Esenin, Georgy Zhukov, Leo Tolstoy, Konstantin Tsiolkovsky… This series brought him his first fame – the gold medal of the All-Union Exhibition of Economic Achievements (1995).

– Yuri Gagarin and Gagarin’s house made the beginning of my “Jurassic period”, says Viktor Ivanovich.

His houses traveled through many exhibitions, not only in Russia, but also abroad.

The second stage of the “Jurassic period” was Bakharev’s friendship with Yuri Nikulin. Victor made a wooden dacha for Nikulin – it looked straight out from a fairytale, no one ever seen such a house in the neighbourhood. Nikulin was delighted with the master’s work and happily helped the artist to develop his talent. He introduced the master to his namesake and fellow craftsman Yuri Luzhkov, who visited Bakharev’s exhibition during the 850th anniversary celebrations of the capital.

Luzhkov suggested that Bakharev attempt to recreate in a model the wooden Kremlin from the time of another Yuri – Dolgorukov.

The work took 6 years of painstaking work by the entire Bakharev family, including their grandchildren. In March 2007 the master’s work “Yury Dolgorukov’s Ancient Wooden Moscow” was bought by the creator of the museum and its patron, Vladimir Pavlovich Groshev, for the Meshchersk Museum of Wooden Architecture.

At the beginning of the process of making the model the master thought: what should it be made of? Straw would be too shiny, wood – too white… One day it dawned on him. In the swamp near Tushino, where he lived, he saw reed, which in winter cools down, weathers, and starts to look like real logs. The find turned out to be useful. This is how the model presented here was built.

The area of the exposition is 4×6 metres. The layout is made on a scale of 1:25 and includes more than 140 fragments.

The wooden Moscow of the time of Yury Dolgorukov, created by V.I. Bakharev, travels us to the year 1147. It is very important to emphasise that this model was made on the basis of long and painstaking work in various historical archives and in the Russian State Library in Moscow and by studying various sources and publications.

The first period of the existence and development of Moscow is defined by historians as the XIIth – the beginning of the XIVth century, when the architectural appearance of the ancient Moscow and the original Kremlin was formed by wooden buildings.

On earthen shafts there was a wooden wall not more than 700 m long which was a wooden paling made of high thick oak timbers. The entrance to the Kremlin was opened by the main gate, along the perimeter of the walls there were 2 two corner towers and 4 “observation” towers.

The central structures of Moscow and the Kremlin were sovereign’s buildings. On the model they are represented by five structures:

3 The mansion of the oldest tsarina.

4 The mansion of the three tsarevnas.

Attention should be drawn to the church buildings of ancient Moscow. We see four different churches:

1. The eight-headed main church of the Kremlin is the tsar’s church.

3. The high main bell tower – the ringing of the Kremlin bells was heard in all settlements surrounding Moscow.

Moscow originally developed as a small town, but later it became a major trade and crafts city in Eastern Europe. This is emphasised by the author of the layout in the following fragments:

1. Layout of a trading row;

In that historical period in the ancient Moscow the merchant class had already begun to emerge, which predetermined the beginning, development and success of the domestic and international trade. In conclusion, I would like to give an overview of the most important elements of the model:

1. A model of single houses for household services (3 pcs.).

2. A corner house with outbuildings.

7. Model of a bridge across the Moscow River.

More than once in the history of Moscow it was ravaged and burned by enemies. But the Russian people have again and again revived the future capital, rebuilt it, expanded its boundaries, gradually turning it into today’s beauty of Moscow.

The museum is proud to be the only museum in the Russian Federation to have a unique layout of “Yury Dolgorukov’s Ancient Wooden Moscow”, created by the gifted artist Viktor Ivanovich Bakharev.

The Meschersk Museum of Wooden Architecture named after V.P. Groshev is a member of the Association of Private and People’ s Museums of Russia.