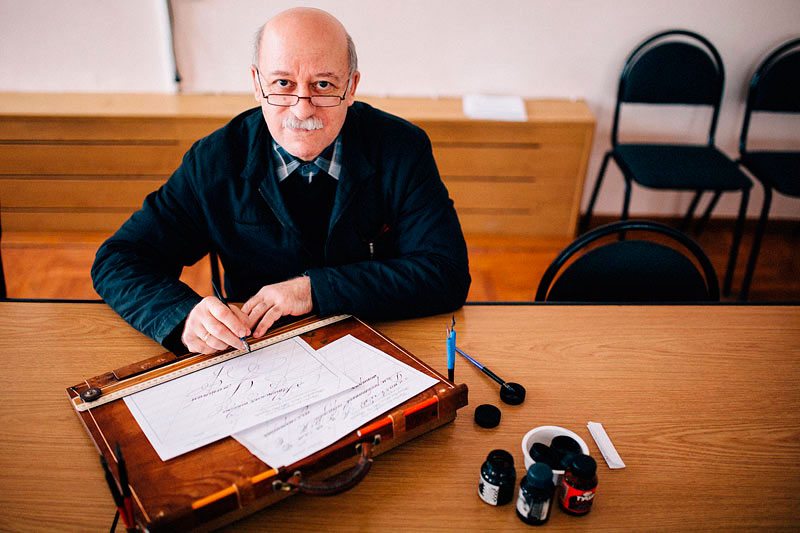 Director of the Association of Private Museums of Russia Alexey Shaburov received a response to a letter sent at the end of February 2020 to the Governor of the Yaroslavl Region D.Y. Mironov with a request to apply for the recommenadtion of Y.I. Arutsev to the state award.

Yuri Ivanovich raised the art of Russian national writing to the highest level. During his creative career, he completed about 3,500 calligraphic works, including more than 1,200 monograms, and developed several types of handwritten fonts. The most famous of his handwriting fonts is Alexander Pushkin. The largest in the world calligraphic inscription in Russian was made in this handwriting font: the name on the State Institute of the Russian Language named after A.S. Pushkin facade in Moscow.

Being convinced that the love of national culture begins with writing, without writing there is no interest in reading and development, there is no love for the motherland, Yuri Ivanovich created a school that has deep moral and patriotic foundations. He revived the old academic techniques of writing skills and created the new ones. His method of teaching calligraphic writing allows you to teach both a student and an adult to write at the level of a calligrapher artist in just 72 hours. The school’s arsenal has a number of copyright programs: Calligraphy, Russian Calligraphy, Left-handed Person, Handwriting Correction, Preschooler, Yaroslavl Ligature, Monogram Art, Personal Signature Design and others. For eleven years, the school has trained over 1000 people, more than twenty of them have become international level calligraphers.

The Russian National Writing Museum, created by Yuri Arutsev, holds about 500 exhibits in its collections, including calligraphic works by 40 masters of the Y.I. Arutsev school and more than 200 writing instruments of the 15th – 20th centuries. The museum’s review book contains enthusiastic records of visitors from around the world: Russia, Italy, Austria, China, Japan, and the USA.

Yuri Arutsev organized the Historical and Pedigree Society (YarHPS), which quickly gained authority in the genealogical community, becoming one of the best historical and pedigree societies in Russia. Working in this direction, he created the author’s methodology of genealogy research, in 2011 it was recognized as the best development of the year, prepared a lecture course of 28 topics, including lectures on family issues, physiology of writing, history and genealogy. Having completed a course of the pedigree studies, Yuri Ivanovich’s students more than once became participants in the All-Russian genealogical exhibitions.

Yuri Arutsev is the author of more than 30 books and monographs on medicine, culture, history, philosophy, genealogy, local history, the Russian language. Among the works of Yuri Ivanovich are: an almanac about the need to return calligraphy to Russian schools, the first collection of Russian literary pangrams in the history of Russia, the first calligraphic dictionary in the world, including about one hundred and fifty definitions, a unique book “The Russian Word: What Can It Be?”, containing about 900 (!) definitions of one Russian word.

At the moment, an outstanding calligrapher, continuing to work hard and fruitfully, is fighting a serious illness.

The Association of Private Museums of Russia wishes Yuri Ivanovich a speedy recovery and hopes that his contribution to the development of the modern Russian culture will be appreciated!