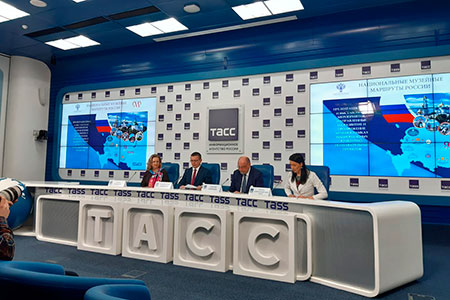 The press conference was devoted to the integration of federal, regional, municipal and private museums into national museum routes and their promotion on the national level and the international market, as well as the popularization of cultural and historical heritage. Speakers at the press conference were: Director of the Museum Department of the Ministry of Culture of the Russian Federation Vladislav Kononov, Deputy Head of the Federal Tourism Agency, Advisor to the President of the Museum Union of Russia Sergey Korneev and Chairman of the “Elisabeth-Sergius Enlightenment Society” Foundation for the Revival Promotion of Charity and Charitable works Supervisory Board Anna Gromova. During the press conference, various issues related to the development of museum routes, international cooperation, the development of tourism infrastructure in the regions as a factor strengthening the popularization of museums were raised. One of the key aspects of the press conference was the statement by Vladislav Kononov on the inclusion of private museums in the national museum routes development program and promoting them on the national level and the international market along with federal and municipal museums. Vladislav Kononov, answering the question of the “Private Museums of Russia” periodical journalist Maria Tomilova, noted the important role of the Association of private museums in the development of museum business, preservation and popularization of cultural and historical heritage, while highlighting the contribution of  A.Y. Shaburov, the director of the Association, in this field of culture.