Remember Your Name: Sokolniki Hosted an Exhibition of Ivan Martsenyuk 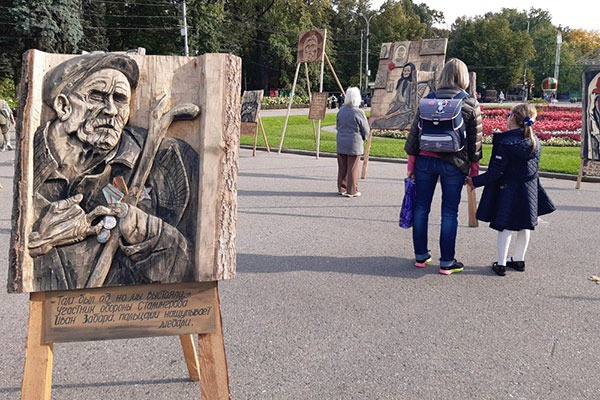 Sokolniki Park hosted the exhibition of Karelian master Ivan Martsenyuk “Remember Your Name” on September 24-27, which was based on portraits of crippled, without arms and without legs, lonely heroes of the great Patriotic war, who lived out their lives in the house of invalids on Valaam in terrible conditions.

The woodcarver performs his work based on graphic drawings by Gennady Mikhailovich Dobrov, painted from 1974 to 1980. In the soviet times, they could only be seen in the artist’s studio – Gennady Dobrov was not allowed to exhibit portraits of war-scorched soldiers to the audience.

– What only he was not told about these portraits, what he just did not hear from colleagues in the shop and various bosses from the culture, – said the artist’s widow Lyudmila Vasilyevna Dobrova. – He was even called a sadist, reproached for the fact that these portraits hit the nerves, the eyes. And he did not expect that his work could cause such a reaction – he just drew for the most exalted purposes: to remind of the disabled people of the war.

But nowadays, thanks to the efforts, talent and energy of Ivan Martsenyuk, Dobrov’s drawings have received a second life. The Karelian master embodied them in wood and carries them around the country to correct injustice and worship people who sacrificed themselves for the sake of freedom and independence of their homeland.

The woodcarver came to Moscow on Sokolniki Exhibition and Convention Centre President Alexey Shaburov’s invitation to participate in the conference “Private museums of Russia. Tretyakovs of the XXI century”.