Post-release. Round table “The role of private museums in the preservation of Perm’s history”, 18+ 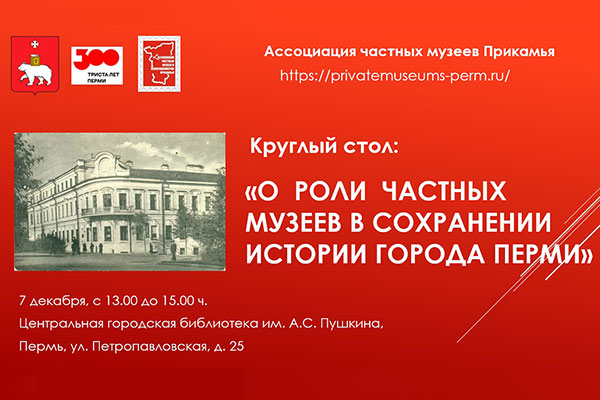 On 7 December in the A. S. Pushkin Central City Library a round-table discussion “The role of private museums in the preservation of Perm’s history” was held. The round table was organised by the Association of Private Museums of Prikamye Region  with the informational support of the Perm City Duma and the Ministry of Culture of the Perm Region. The event was organised as a part of the VII City History Forum “Perm City – 300 Years in the History of Russia”.

The participants discussed the role of private museums in the preservation of historical artefacts as well as such museums’ interaction with the city and regional authorities. The question of creating a municipal museum of Perm’s history was raised. Municipal museums in Yekaterinburg, Kirov, and Ufa were cited as examples. Private museums, the members of the Association, made presentations of their collections.

The main idea of the speakers was that private museums today are a kind of alternative to the creation of the Perm City History Museum, a realistic opportunity to show exhibits from private collections. The aim of the Association of Private Museums is to help the city preserve its history by creating private museums, by transferring valuable historical artefacts from private collections, which are not open to the public, into exhibition spaces.

The Association will continue its work aimed at bringing together private collectors, organising joint exhibitions and will promote the creation of a House of Private Collections in Perm.

As a part of the round-table discussion, an exhibition of Natalia Golubeva’s private shoe museum “Minishoes” was opened in the library building, and a virtual exhibition of New Year cards by Perm Goznak artists from the collection of the Postcard History Museum of Perm by Sergei Filatov was demonstrated.

The nearest joint exhibition of members of the Association called “Oriental New Year” will open on December 21 at the Perm Puppet Museum (Perm, 82a Permskaya St.). The exhibition will feature exhibits depicting the tradition of celebrating New Year in the Far Eastern countries: China, Japan, Korea, Vietnam. Everyone is welcomed to visit the exhibition.

The pictures of the Round table discussion: https://disk.yandex.ru/d/YxDrx2CkZP5XTg

Presentations of the participants: https://disk.yandex.ru/d/M7nTPTf58LNRPA

Programme of the round table: