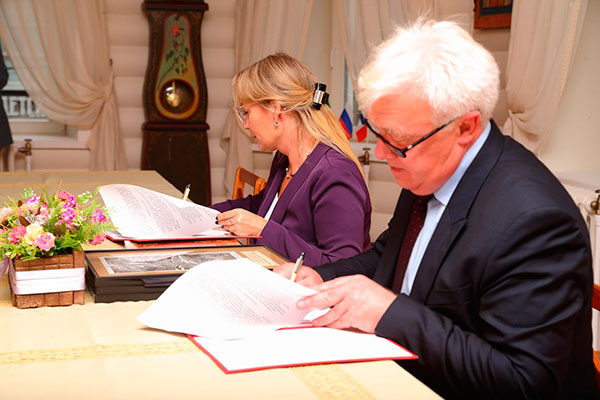 On September 10, in the village of Vyatskoe, Yaroslavl Region, a solemn signing of a Memorandum of Cooperation between the Vyatskoe Historical and Cultural Complex and the State Historical Museum took place.

The document was signed by the director of the State Historical Museum Alexey Levykin and the director of the Vyatskoe HCC named after E.A. Ankudinova Elena Shakhova. During the signing ceremony, the heads of the institutions exchanged memorable gifts. Alexey Konstantinovich handed over the book “French Precious Watches and Snuffboxes of the 17th – 19th Centuries in the Collection of the Historical Museum”, which contains a brief excursion into the history of watchmaking and jewelry production in France. Elena Shakhova, for her part, presented engravings made at the Vyatskoe Printing Museum and depicting the village of Vyatskoe and the Cathedral of the Intercession of the Most Holy Theotokos in Moscow, as well as a certificate of Alexey Levykin’s visit to the most beautiful village in Russia, the village of Vyatskoe.

Elena Shakhova: “It is a great honor for us, for all residents of Vyatskoe and residents of Yaroslavl, it is a gift of fate that will allow us to enrich our culture and knowledge”.

“What is the history of our country? This is a huge number of “Vyatskoes”. The kind of conglomerates that create its well-being. For this it is worth signing such agreements”, – said Alexey Levykin, director of the State Historical Museum. “This is our first experience of interaction with private museums, whose professional competence currently allows them to be full members of the museum community. This is confirmed by the Vyatskoe Historical and Cultural Complex, which has become a pioneer in the private museum sphere at a high professional level. Moreover, interaction with the regions of Russia is a priority area of ​​activity of the State Historical Museum. And we are glad to have such interaction with the Yaroslavl region”.

Oleg Zharov, founder of the Vyatskoe HCC named after E.A. Ankudinova: “The signing of this document is of particular importance for us. One of the activities of the Historical and Cultural Complex Vyatskoe is local history, research and scientific work, thanks to which the museum funds are replenished, books and materials on the history of the Yaroslavl Region are published. And the annual project Meeting of the descendants of entrepreneurs and clergy “Birds return to their nests” fills in the gaps in history and attracts the attention of the professional community. It is a great honor for us to start cooperation with one of the largest museums in Russia. This is both a sign of the quality of the long-term meticulous work of our employees, and the understanding that state museums are ready to support the initiatives of private museums in the regions of Russia. Finally, it is especially pleasant that cooperation begins in the year of the 600th anniversary of the village of Vyatskoe and the 10th anniversary of the Vyatskoe HCC.

The significant event was attended by Vyatskoe’s partners and friends. Acting Director of the Department of Tourism Vladimir Lysenko stressed the importance of the signed agreement and its significance for the tourism industry of the region: “We believe that everything that is done on the territory of Vyatskoe deserves the highest marks. And the tourist flow to Vyatskoe is the best assessment of everything that has already been done.”