Esenin for 5 millions. Are private museums of Russia destined to be sold away? 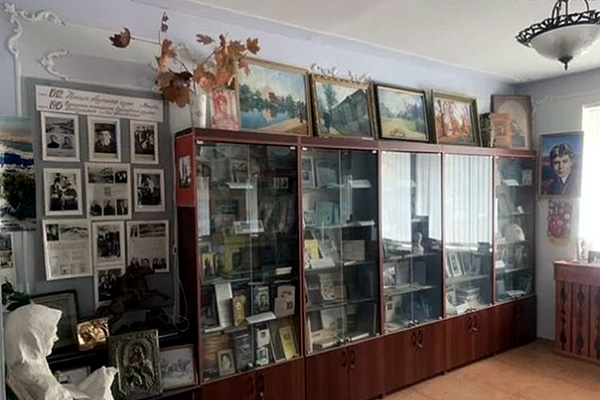 “To those who appreciate art, room not for sale, just bookshelves and everything related to the writer, please contact me,” says the ad.

The museum was founded in the early 2000’s by a literary critic Georgy Agarkov, long time collector of books, art and all things related to Esenin. He even has some letters by the poet.

Usually Orel Oblast is associated with the works of Ivan Turgenev, Nikolai Leskov, Afanasy Fet. But Orel is the place of birth of Zinaida Raikh, the first wife of Esenin. Their first daughter Tatiana was also born here. At the place where Raikh’s family home used to be, the Esenin park with a bust of the poet is now laid out. Although later an apartment building has been built on the same place. With the support of sponsors Agarkov managed to buy an apartment in the building and established a museum.

“No entrance fee. I didn’t open it for the profit, I just wished for young people to read and learn Esenin”, said Georgy Agarkov at the time.

He died recently, and his children decided that the apartment was more profitable than the museum, so all the stuff is now for sale for five million rubles. They can’t explain exactly how the price was calculated. When the reporter of the “Rodina” newspaper called the provided phone number, he was told that the price of “four, maybe three” millions was also suitable.

There are many private museums like this one in Russia. For example, Anatoly Smirnov of Ryazan Oblast (not so far from the Esenin place, in Kasimov) set up a museum of Anna Hansen, who translated the tales of Hans Christian Andersen into Russian. Smirnov had learned that his house was built at Anna’s place of birth, and pushed him to create the museum.

There were once museums of Esenin in Voronezh and Vyazma. Vyazma Museum was one of the most famous in Russia. It was founded by Pavel Propalov, miller operator at a local engineering plant, honored citizen of the town. His collection was appreciated by many people. But he died in 2018. And now the museum is gone too. Half-century of work all gone in less than two years.

The place was inherited by Pavel’s children. As the reporter of “Rodina” found out, it’s now being renovated – to live in, obviously. The exhibits are apparently for sale. There are enough buyers for it for the price of several millions.

The son has no wish to pass the collection to the city for free or otherwise (it seems that the father didn’t mention it in his will), nor does he want to discuss the future of the museum with anyone. Although he did give the Vyazma Local History Museum several modern books and porcelain figures of late Soviet time, mostly broken. Probably he just wanted to clear out the space.

Pavel Propalov owned a few lifetime editions of Esenin and the poets of his time – Blok, Kluev – and lots of postcards, photos of Vyazma landscapes and citizens of the beginning of the 20 century, several icons, carved wooden figure of St.Neal Stolbensky, sleigh bells, coins, rare pins and signs.

“I used to think naively that my collection would be appreciated. That I’d get rent-free space, get help…But then we had to settle just for this. It’s now clear for me that the city government just can’t appreciate what they’ve got and what can be lost,” Propalov said in an interview in 2012.

The article was titled “Propalov’s treasure”. Well, now the treasure is lost.  And the founder’s words sound even more piercingly now that his life’s work is destroyed by his own descendants: “I hope the time will come and on a trip to Vyazma the tour guide will tell the group that the very first book of Esenin, the great Russian poet, is kept right here in the Vyazma Museum. And everyone will get excited and ask the guide to show them the book. But I don’t know when this time will come.”

A few years ago Alexander Volnukhin, ex-director of a collective farm in Tver Oblast, founded the museum of Vice Admiral Vladimir Kornilov, hero of the Crimean War, who was born here. Then the Museum of Rural Life was founded. It was surprising to see all that happening in the middle of nowhere. But last year Alexander passed away.

The Staritsky District Admnistration in Tver Oblast informed the reporter, that the wife of Volnukhin was taking care of the museum. The local government really ought to take custody of the museum. Both collections and ideas behind private museums are often much more exciting than those of public museums, the main rule of public museums being “please do not touch”. But private museums have no security so they can disappear at any moment. We witness all the time that museum founder’s descendants see collections as a burden, while local government is too busy taking care of the museums funded from the budget.

Right now there is a lack of dialog between the government and private museum administrations. For example, there are only few cases of private museums getting rent-free space from local authorities. Director of the Association of Private Museums of Russia Alexey Shaburov agrees, “There is a private museum in Murom, the Cybermuseum. The founder spent 25 years collecting everything the electronics industry produced. It’s all for sale now…It’s a huge loss to our history. Or take for example the Izmailovo Iron Museum. I’ve never seen so many kinds and sorts of irons. It’s all part of the family history, everything is connected. But they can’t afford the rent.”

Alexey Shaburov puts great effort in the promotion of private museums. Last year he gathered tens of them at the exhibition in Moscow.

“Local administration usually doesn’t take private museums seriously. They are usually founded for one of two reasons. Either the founder has money, or he has a hobby and wants to share it with someone to cover the expenses. Let’s say you found a private museum in Moscow. It will probably remain unprofitable for five or six years, if it survives at all. Even longer in the regions.”

The Association tries to support people engaging with private museums and education. Right now Shaburov is trying to get the government to notice Yury Arutsev, Founder of the Yaroslavl Calligraphy Museum. He’s diagnosed with cancer, he doesn’t have much time left, but he continues to teach at the Calligraphy School and take care of the Museum.

Recently the Museum of Russian Gusli and Chinese Guqin opened in Sokolniki. Right now not many people know about Gusli, authentic Russian musical instrument. The museum not only have the collection of Gusli itself, but also has gathered unique materials from folklore expeditions.

“If local private museums disappear, we’ll lose the part of culture that public museums cannot preserve because they are more conservative and bureaucratic,” says Alexey Shaburov. “Private museums have really interesting and unique collections. When they are gone, nothing could take their place.”