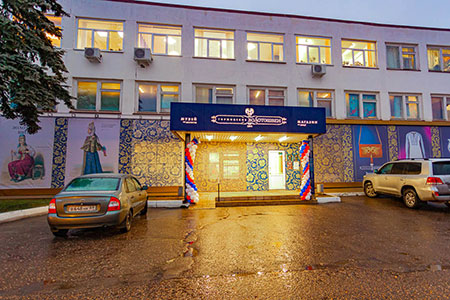 On December 27, 2019, the director of the Association of Private Museums of Russia, Alexei Shaburov, attended the opening of the new Museum of “Torzhok gold embroidereresses” factory as an honored guest, where he as well as Deputy Head of the Torzhok Administration Yury Grudin and Chairman of the Legislative Assembly Committee on Economic Policy of the Tver Region Oleg Lebedev was entrusted with the right to cut the symbolic red ribbon.

According to Oleg Ivanov, Chairman of the Board of Directors of “Torzhok gold embroidereresses” OJSC, the museum was created on the basis of the Museum of Gold Embroidery, which was closed in October this year for large-scale reconstruction, as a result it was possible not only to achieve technical equipment at the level of the country’s leading museums, but also to completely change its concept. The unique exposition of the new museum, “Torzhok gold embroidereresses” tells about the history of Russia through the traditions of hand-made gold embroidery from Novyj Torzhok dating back centuries. The museum presents several thousand exhibits, including many interesting archival documents and artifacts found during archaeological excavations in the city of Torzhok and many other cities of Russia.

The gold embroidery from Novyj Torzhok brand is one of the most recognizable Russian crafts. Novyj Torzhok’s craftswomen embroidered in gold and silver for wealthy merchants and boyars various household items and clothes (belts, boots, wallets, various details of holiday costumes). The fame of the gold embroidereresses from Novyj Torzhok and the level of their skill are evidenced by the numerous orders received from the imperial court. The enterprise “Torzhok gold embroidereresses” continues their traditions. This is the only company in Russia that preserves and develops the art of hand-made gold and silver embroidery on an industrial scale.

The new museum will certainly contribute to the development of cultural tourism in the Tver region. According to its governor Igor Rudeni, the opening of new objects for tourists will increase the attractiveness of the region. “The tourism industry today is the most comprehensive tool for the development of the regional economy. By developing tourism, we are transforming our municipalities, small towns, historical places, ” he said.